listerlandscapes A place to read and think!

How Can You Design for a Balance Between Animal Welfare and Enrichment Compared to Human Enjoyment of Zoos?

Through the garden history module at Writtle I researched the life and works of two Landscape Architects Ernst Cramer and Charles Jencks who have both lived rather controversial lives.

Meeting the challenges of outdoor provision in the Early Years Foundation Stage.

Possible questions for the paper:

How can landscape architects design zoos to enrich both the animal’s lives and the visitor’s enjoyment?

How can landscape architects help in the design of zoos to enable maximum visitor enjoyment and security and enjoyment of animals?

How can you create a balanced zoo design to enrich both the animals lives and humans enjoyment?

How can you create a zoo design which balances animal enrichment against humans enjoyment?

Are zoo’s masterplan concepts adapted when changes occur in routes and enclosures or are they flexible enough to allow for  change?

The Special Topics Module aims to provide additional project and research opportunities for students in Landscape
Architecture Courses. Students will work with designated faculty where mutual interests and expertise are available. Examples include a
research paper shared with a faculty member, pursuing a branch of research in addition to and complimentary with the
students’ research, an internal project proposed by one of the centres, or further and more specialised study as a
continuation of a module. Independent study is optional, and will be possible where special interests of the student
parallel the interests of faculty, School of Design and/or the Centres of Innovation.
Special Topics may also take the form of a seminar or taught module where students interact and present selected topics
in addition the written submission.

We were presented with a series of possible topics and I chose to follow my own line of inquiry as I am very interested in Zoo design.

I am researching the design of not only the enclosures but the overall masterplan of a zoo site and how they adapt and develop on from this when new species arrive and new enclosures are built. I have many interesting questions and much research to gather.

Whilst researching into why there is a need for better designed outside areas for children, I looked into the current situations and problems facing children and families and how these can be resolved from children having both a better understanding of the natural world and greater access and availability.

I came across a film maker who is looking into this topic and why he feels it is important to get children outside! It is an interesting piece.

In National Trust’s Natural Childhood report naturalist, author and TV producer Stephen Moss charts years of academic research and a steady stream of surveys on the subject, highlighting how a generation of children is losing touch with the natural world. Here he talks about the importance of reconnecting children with nature.

Remember romping around the woods or building tree houses as a kid? According to author and futurist Richard Louv, today’s children are in danger of losing the benefits of unstructured outdoor play. In Last Child in the Woods: Saving Our Children from Nature-Deficit Disorder, Louv draws a connection between exposure to nature’s physical and spiritual bounty, and improved health, creativity and empathy. Outdoor play is proven to inspire children to embrace the abundance of the planet with all their senses and to help them become environmental stewards. Hear Louv speak and be part of a renaissance in connecting youth with nature.

A child in Nature -a very interesting film!!

A documentary film about Nature Deficit Disorder by Miranda Andersen. The film features an interview with environmental author Richard Louv.

A report from the Natural Childhood summit…

We are besieged by stories of today’s young people not knowing their acorns from their aphids; seemingly terrified of the unknown outdoors, of taking risks or getting dirty knees. Can we really change them? Jules Howard reports from the Natural Childhood summit, taking place today in London, organised by the National Trust and partners.

I’m pretty sure this is the first summit I’ve ever been to. Only one other summit comes to mind actually, and that’s the 1992 Earth Summit in Rio. I never went to that because I was a twelve-year-old boy. I watched it on Newsround though.

It was strange being on the other side today. I was the adult in a suit at a summit, talking with other adults in suits about how best to make life greener for today’s twelve-year-olds.

Building on the National Trust’s Natural Childhood report, the summit was billed as a chance for experts to meet and discuss solutions for how we can bring young people and nature closer together. It was the most highbrow event of its kind in the UK, contributing to what is becoming a global movement.

So was it a success?

Like the environmental problems that the Earth Summit attempted to tackle, modern childhoods are complicated and hard to influence. Just like trying to conserve pristine virgin rainforests or coral reefs, real solutions involve lots of different groups of stakeholders, a dash of inspiration, frank exchanges of ideas, further research, and a bit of financial backing.

The good news is that the summit built foundations for all of these things. Only foundations, mind – but it’s a start. There is much more work to do, and scrawled felt-tip ‘action-points’ festooned the walls of the afternoon’s delegate workshops.

We have work to do indeed, but I feel re-invigorated. We may not be able to change society fully one-by-one, but as a population of individuals and stakeholders we can give it our best shot.

Anything else to report? Well, ok. There was something a bit weird. It was surprising that there were no children anywhere. Their thoughts and views seemed elusive, somehow. Glimpses here, a sound-bite there. Seen and not heard, ironically like the children of decades past. Perhaps this rare and elusive species needed more air-time? (To be fair, I guess it was a school-day).

Perhaps the most rapturous applause of the day was saved for Chris Packham, who appeared holding a dead starling’s wing, a fox’s skull and clutching his boyhood nature diaries. Seeing him rail against fluorescent tabards, marigold gloves and disinfectant hand gel was a sight to behold.

One of his sentences rang in my ears. About nature and modern childhood he said, “If they’ve never had it, what are they going to fight for?”

I looked around the room at this – how many of today’s twelve-year olds will be wearing suits and fighting for causes like this in twenty years?

This is a great comedic short film  – The Last Child in the Woods!

Found this interesting documentary today – Janne Saario – the keen pro skater turned landscape architect, designing some of the most innovative skate parks in the world!

As the research project is centred around design for curriculum enhancing landscapes the choice of site should either be a primary school or a local park  or green space close to a school that can support such activities.

The first choice is the school I currently work at: Great Wakering Primary School

Imaginative Spaces for Children to Learn and Grow

My Research Project is based around schools outside areas with a hope to develop landscapes that can be used throughout the different key stages in all areas of the curriculum.

Currently the dissertation question is:

How can the school landscape be designed and used as an agent to harness the potential in children’s creativity as well as fulfil and integrate fully into the Key Stage 1 curriculum?

The research within this proposal centres on the design and use of outside learning areas within school grounds and the research into fully integrating an outside curriculum into Key Stage 1. The choice of topic came from my prior areas of study in Primary Education and Landscape Architecture. This is an area of interest due to the current gap within schools. The main scope for this proposal is to research and investigate the impact that outdoor learning has on children between the ages of 5-7 years. The intention will be to look into different ways to design both inside and outside areas to allow for creative learning possibilities in order to engage children to learn whilst playing. If children are engaged in activity and happy, negative behaviour should therefore be reduced. Well designed outdoor environments should be able to integrate fully into the Key Stage 1 curriculum so that teachers can use the areas to their full potential.

Materials work with the existing materials on the site. The steel from the gas cylinders inspire the site with their vertical presence. The steel uprights of the outside shell are used within the education centre linking the two together. Due to the flooding on the site permeable paving will be used aiding with drainage. The wetland area will have a series of wooden platforms and boardwalks to allow pedestrian flow and access these will be at two heights.  A raised platform 3m above the wetland will give views across the planted treetops and a lowered boardwalk which will be intimate with the large grasses and wetland plants. There will be a plaza area around the gas cylinders to extend the recreation space and open up outside dining and events.

Below are perspective 3D drawings I put together on photoshop to illustrate the design intention. 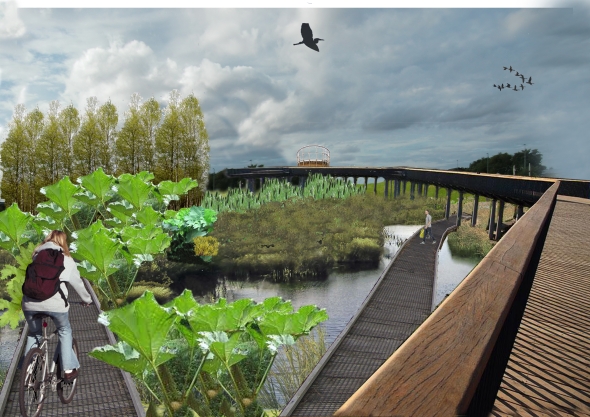